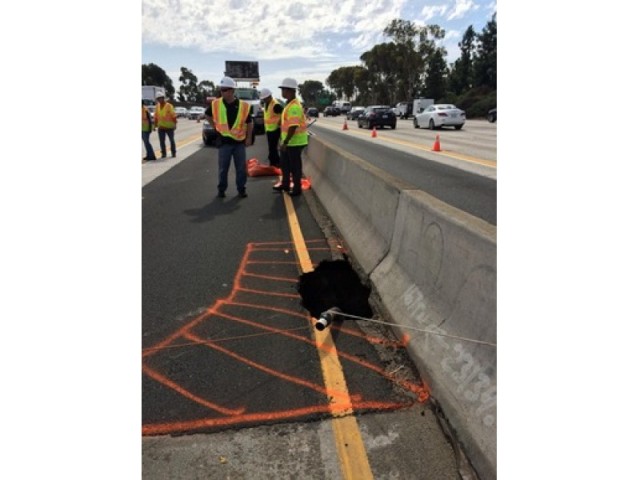 A sinkhole caused by storm runoff opened up on the San Diego (405) Freeway in Hawthorne today, prompting lane closures expected to last until around midnight.

The damage to the freeway’s northbound and southbound carpool lanes in the area of West 135th Street was reported at 11:37 a.m., according to the California Highway Patrol.

It was on the approach to a bridge spanning 135th Street, he said.

Wow! This one’s a real hum dinger and it’s in jolly old England!!! 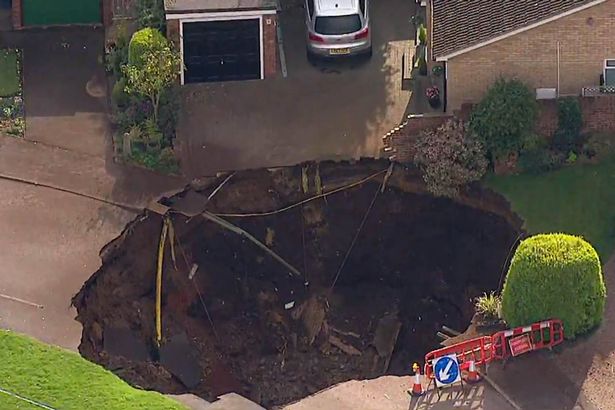 A giant sinkhole has opened up in a residential street in St Albans.

The 66ft (20m) diameter hole spreads across a front garden and driveway on Fontmell Close and is 33ft (10m) deep, forcing the evacuation of several families from their homes in the night.

Aerial footage captured the scale of the damage.

Spooky stuff! Perhaps this should be listed on October 31st!

A man mowing in Franklin County found what appears to be a human skull in a sinkhole.

Mark Wells said he was mowing in a farm field along Jones Lane in the Switzer community Tuesday when he noticed a sinkhole that had gotten significantly deeper. When he stopped and looked into the approximately 15-foot deep hole, he spotted what looked like a human skull lodged in the side about halfway down.

Wells said the sinkhole has been there at least a year, and it was marked off to keep anybody from falling in, but it wasn’t nearly as deep before.

Sheriff Pat Melton tells LEX 18 that they are uncertain of the age of the skull, but that they must treat the scene as a homicide scene.

The Franklin County Sheriff and the coroner are currently on scene. An excavator is being brought in to see if there are more remains on the site. The skull and any other remains found on scene will be sent to the coroner’s office to be identified

A sinkhole measuring 7 meters wide and 30 meters deep appeared all of a sudden in central Turkey’s Konya province. Formed in the middle of a field, the crater is thought to have formed in the space of 24 hours.

Though no one was injured as a result of the ground caving in, locals were shaken over the incident. The sinkhole appeared as they were working in the field explained local farmer Fatih Biltekin, “We heard a loud and terrifying sound all of a sudden. We were afraid for our lives, we’re lucky no one fell into it.”

A fire truck on its way back from a call on the city’s far southeast side Tuesday night became stuck in a sinkhole.

No one was hurt when pavement beneath the rear end of the ladder truck crumbled at about 7 p.m.

Fire Department spokesman Will Knight said that the street outside 308 E. 136th Pl. collapsed beneath the weight of the rig.

A Streets and Sanitation Department wrecker had to be called in to try to haul Truck 52 out of the hole on the dead-end residential street in the city’s Riverdale neighborhood, just north of the southern city limits.

One resident said it is the third street collapse on the block in recent weeks.

Asked if it is time for some permanent work to be done, Jesus Torres said, “I think it is long due but we don’t know how long that is going to take. We have been enquiring about it for a couple months.”

After almost two hours, a tow truck and hydraulic equipment got the truck out of the hole. 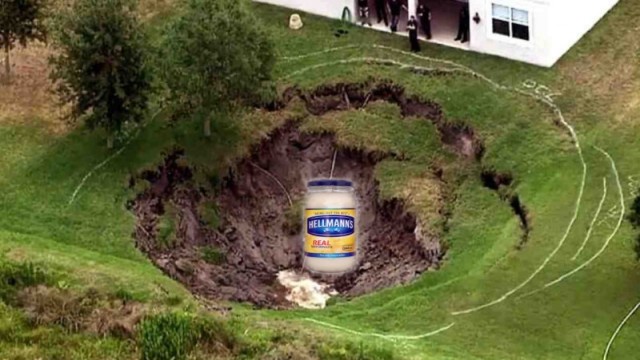 A sinkhole had opened up on Highway 6 in one of the eastbound lanes of the four-lane highway, between Jackson Avenue and Chucky Mullins Drive (formerly Coliseum Drive).

As quickly as they and city maintenance crews could respond, traffic cones were placed and vehicles from log trucks to minicars were routed onto the inside shoulder of the road.

“I passed over that spot around 8 this morning, and I noticed a bump that hadn’t been there yesterday,” said Anna Sayre, who works at the University of Mississippi. “I didn’t think anything of it until I got to work and started hearing about the sinkhole.

“I’m thankful to be one of the many people who weren’t hurt,” Sayre added. “You hear of things like this happening, but it’s usually discovered because a car crashes into it.”

City Engineer Bart Robinson said his first fear was that a water main had somehow burst uphill, but the culprit appeared to be a 24-inch culvert buried 31 feet below the highway, which had separated, causing a slow erosion. Mississippi Department of Transportation crews brought a trackhoe to further excavate the hole so the cause could be ascertained and corrected. An impromptu traffic lane was built farther into the median so vehicles could pass at a distance that would be safer both for motorists and for the workers.

Asked for a timetable, Robinson said it was purely a guess that the work might be finished sometime today.

Mitch McCoy of Thaxton had already gone to work at Discount Lumber on the west end of Oxford and was driving back east to accompany a co-worker who was taking his own vehicle to the mechanic.

“I saw these vehicles in front of me, and it looked like they were hitting a speed bump. It was kicking their rear ends way up in the air,” he said. “I pulled beside it, and (the hole) was the size of a dinner plate. It wasn’t very big at all, but I could see it was a sinkhole that was going to cave in, so I backed my truck up and turned it sideways across the highway and got out.”

Drivers were facing into a rising sun, and several noticed McCoy waving in the middle of the highway before they noticed his SUV in the road. Some went around, he said, and came perplexingly close to the sinkhole.

“I walked over and looked at it and realized, man, that’s seven or eight feet deep. When I took a few steps back toward my truck, it gave way, and I turned around and it was like 10 feet in diameter then,” he said.

Shortly after, Oxford Police officers positioned their cruisers in front of the hole, and emergency messages began going out.

“One of the police officers walked up and said, ‘Wow, man – if somebody had hit that at a good speed, it would’ve killed somebody,’” McCoy said.

One of those people was Pamela Grafton, who was taking her 15-year-old son, Cole, to school.

“We were afraid we were going to hit him, because he was in the highway,” she said of McCoy. “If his car had not been stopped, we would have hit the sinkhole. We’re so thankful for God’s protection and for (McCoy). In an instant, things can change. I’m just counting my blessings.”

McCoy said his work schedule keeps him from many volunteer opportunities.

“My life consists of going back and forth to work. I work three jobs, so I don’t have a lot of time to do anything, so I made a decision that I’m going to be that guy who stops and gets two-by-fours or whatever may be in the road out of the way so people don’t get hurt,” he said. “It ain’t a lot, but it’s something. I don’t know that I saved anybody’s life; I was just doing what needed doing.”

Wow, I love two things, Russian dash cams, and sinkholes, this is the best of both worlds… I don’t know how this escaped out attention for so long!

This is the terrifying moment a huge sinkhole suddenly opened in the middle of a busy main road – almost swallowing a cement truck.

Adam Zubarev, 47, narrowly escaped injury after the back end of his truck was engulfed by the hole in the road in the city of Voronezh in western Russia.

The dash cam footage was recorded by Victor Bayshevfell, who was in one of the vehicles following the cement lorry when it fell into the tarmac.

Police spokesman Jaroslav Yefremov said at the time: “The truck which was a ‘Kamaz’ cement mixer vanished into a hole in the ground at the point with the road runs alongside the river outside the Marksimir shopping centre.

“The road has only just been repaired so it’s a mystery as to how this happened.”

Authorities had to leave the truck in the hole for two days while they tested the road structure. The footage was originally uploaded to YouTube in 2014, but has recently resurfaced after being shared on social media and viral video sites.

The one minute and 13 second clip has clocked up more than 1.1 million views.

It’s been a busy week in the UK for sinkholes… 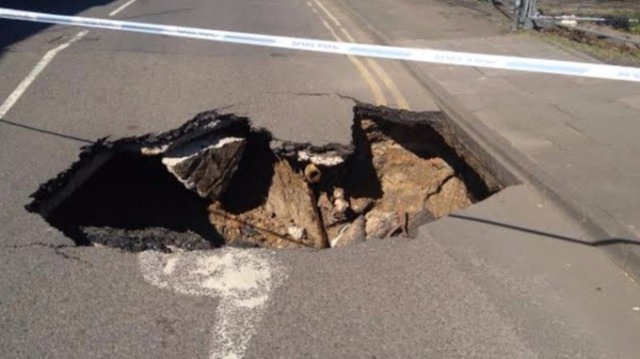 Work to repair a sinkhole which opened up in Northampton last week should be finished this week.

The hole appeared on Earl Street on Thursday afternoon.

The sewer and damaged water main beneath the surface should be fixed by today, and the Highways agency is looking at refilling and reopening the road by the end of the week.

Could have been a lot worse! But always pay attention to barricades!

A woman has been taken to hospital after falling into a sinkhole which opened up in the pavement outside a London cafe. 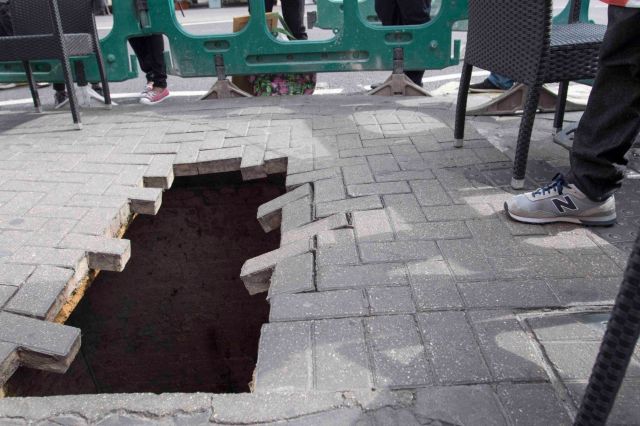 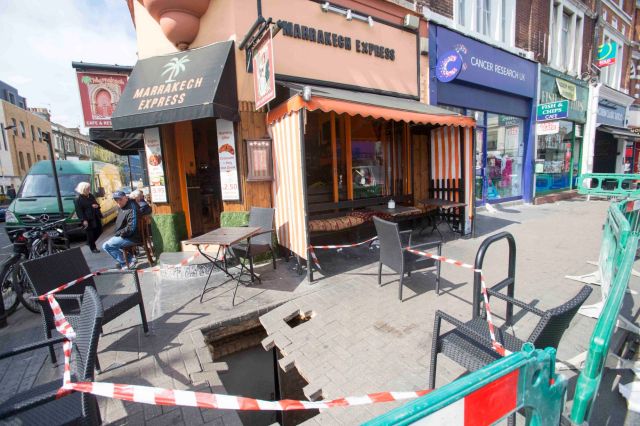 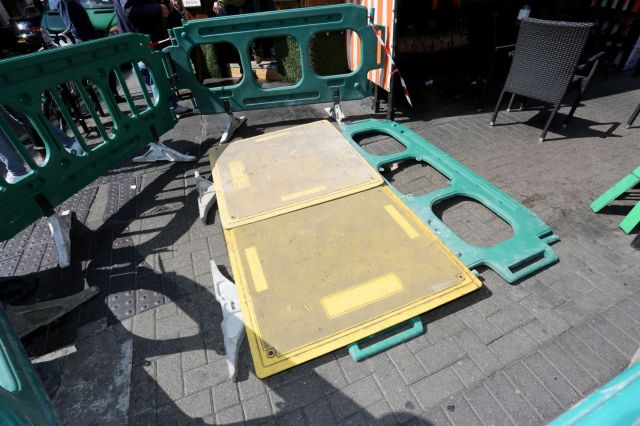 An eyewitness reported hearing a “loud scream” before the woman apparently disappeared into the hole.

Police and ambulance services were called to North End Road in Fulham at around 8.50am this morning to reports of a “pavement collapse”.

The scene was cordoned off and police confirmed a woman has been injured.

The ambulance service later said the woman, believed to be in her 40s, had been left “shaken” and taken to hospital as a precaution.