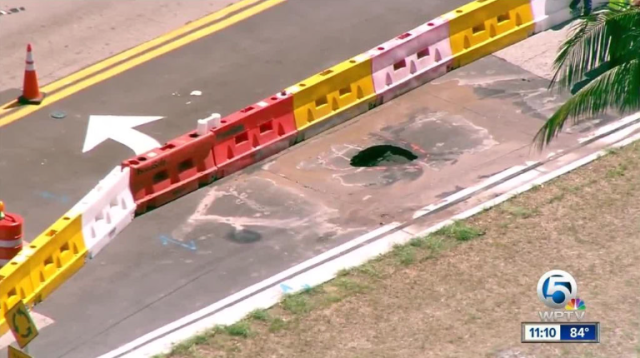 From our Hollywood correspondent, Paul Von Soucek: Breaking: The sinkhole was caused by a suspected leaking water main.

A large sinkhole has formed in front of Mar-a-Lago, the Palm Beach estate belonging to President Trump.

“A 4′ x 4′ sinkhole has formed on Southern Boulevard directly in front of Mar-a-Lago,” the traffic alert read. “It appears to be in the vicinity of the newly installed water main. West Palm Beach Utilities distribution crews have secured the area and will most likely need to do some exploratory excavation today.”

But where utility workers saw a repair project, the Internet saw a giant opening — for metaphors.

Crews are digging around a sinkhole that opened in front of President Donald Trump’s Mar-a-Lago Club, but it’s still unclear what caused the hole.

The sinkhole is just west of Mar-a-Lago’s southern entrance, where workers are gathered.

What started out as a 4-foot by 4-foot hole in front of the club has grown to about 10-feet by 6-feet due to the digging, which required an excavator. The sinkhole is near a new water main on Southern Boulevard, though it’s unclear if the two are connected.

Utility crews from West Palm Beach secured the sinkhole and have been doing exploratory excavation this afternoon.