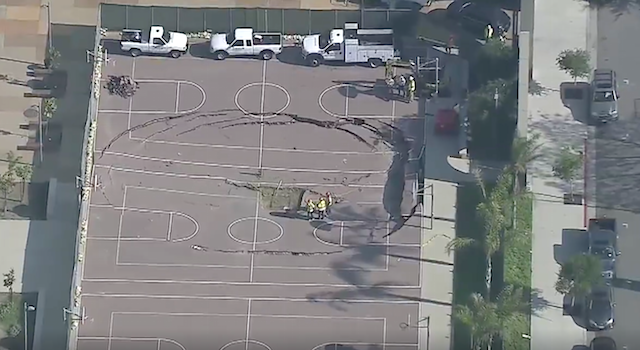 A large crater has opened up on the grounds of an LAUSD school whose site was once at the epicenter of an environmental justice battle. The crater measures about 75 feet by 45 feet according to CBS Los Angeles. Regardless, class remained in session Tuesday at Linda Esperanza Marquez High School in Huntington Park. The school, which opened in 2013, is built on the rubble of “a former toxic concrete mountain” known as “La Montaña.” LAUSD spokesperson Elvia Perez told LAist that “there is no known correlation” between the current crater and the ground beneath the school.

Despite news reports declaring the crater on the school’s basketball court to be a sinkhole, Los Angeles Unified School District officials maintain that the collapse in the concrete is the result of a “man-made water collection basin.” An LAUSD official told LAist that the “man-made water collection basin” in question is a storm water retention and recharge system used to collect excess rain water, and that it was built during the school’s construction in 2012.

La Montaña was a five-story high pile of concrete debris and crushed asphalt collected from freeways damaged by the 1994 Northridge earthquake, along with other solid waste, “that dominate[d] its environs like some immovable force of nature,” as the L.A. Times wrote in 1996. The 600,000 ton pile of rubble, which stood so long that trees were growing from it caused major health problems for residents of Huntington Park, a predominately Latino working class community southeast of downtown. “If there has ever been a poster child for environmental justice, this is it,” Integrated Waste Management Board chairwoman Linda Moulton-Patterson told the L.A. Times in 2004.

After a decade of community activism and courtroom battles, cleanup of La Montaña finally began in 2004. The school is named for community activist Linda Esperanza, whose apartment once faced the rubble.

Recent headlines about lead poisoning from Vernon’s Exide plant have once again brought issues of environmental justice to the forefront of the civic conversation, but this is sadly no new battle. In a city of smog and traffic, low-income communities of color have a long history of being disproportionately affected by environmental hazards.

This entry was posted in Structure v Sinkhole, Videos and tagged California, sinkhole. Bookmark the permalink.