A 10-inch depression in the road turned into a 13-foot hole Tuesday as the city’s engineers were working to fix the intersection of Mission Road and Marguerita Avenue. 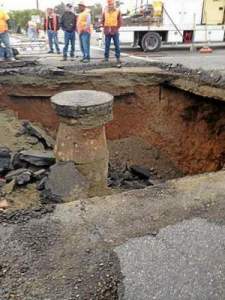 City engineers did not have a cause for the hole, which started caving in Monday afternoon and grew to 13 feet after crews began digging around 1 p.m. Tuesday, Alhambra Police Sgt. Jerry Johnson said,

“They think it has something to do with the way the water flows,” Johnson said, referring to the recent storm runoff. “But they’re not sure what caused it, they’re still digging and investigating.”

The Marguerita Avenue bridge was closed over the train tracks and the eastbound lanes of Mission Road remained closed, Johnson said. The road was anticipated to be opened by Wednesday evening.

This entry was posted in Pictures and tagged Alhambra, sinkhole. Bookmark the permalink.