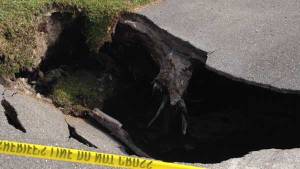 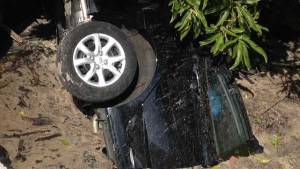 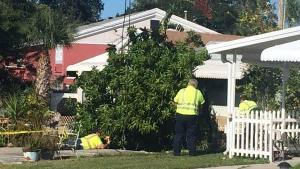 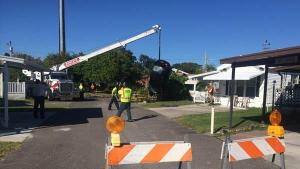 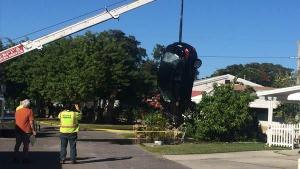 The driveway of a home on Torch Street in Holiday appears to have caved in next door to where a sinkhole swallowed a car earlier this month.

The depression is the third incident in the neighborhood, where two sinkholes opened, both those holes were recently filled in.

“We thought now that the holes were filled, we were on our way to getting back to normalcy, but it doesn’t look like it yet,” said Laura Meldrum, who was evacuated two weeks ago.

Meldrum is among the neighbors who remain out of their homes at the Holiday Travel Park, put up at a hotel paid for by the park. Pasco County released a statement Monday saying the decision of when to return is between the homeowner, private insurance carrier and insurance carrier of the park.

The county has only condemned one home – the one where the car was swallowed up (and later pulled out).

“At this point we don’ t see any other structural issues that are going to condemn the other homes,” said Pasco County spokesman Doug Tobin.”That could change if more of these holes do open up.”

Pasco County announced Monday that work on a nearby sewer project, which some residents suspect holds some blame for the sinkholes, will remain halted through the Thanksgiving weekend. The county planned to deliver letters to residents telling them work will not resume “until our geo-tech consultants have told us how to best proceed with the project.”

A private geology company was in the neighborhood on Monday, taking soil samples and testing the ground along Torch Street.

This entry was posted in Vehicle v Sinkhole and tagged Florida, sinkholes. Bookmark the permalink.