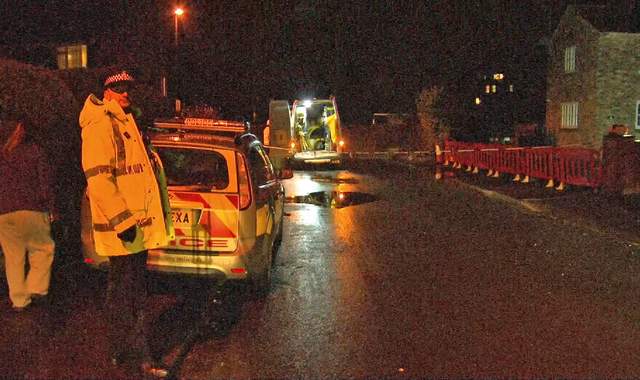 Three homes have been evacuated over fears one was in danger of collapse after a sinkhole – the UK’s sixth in a month – opened up.

A cordon has been put in place to protect members of the public in Magdelen’s Close, in Ripon, North Yorkshire, after police were alerted at 5.40pm on Monday to the 25ft-wide hole.

No injuries have been reported at this stage and police officers are going from house to house to warn residents close to the affected properties.

Firefighters, ambulance crews, utilities engineers and structural engineers are also at the scene.

It comes after fears gypsum subsidence had caused ground instability in the area.

The concerns caused councillors to reject a plan for 75 homes less than half a mile away earlier this month, The Ripon Gazette reported.

A 5ft-wide, 20ft-deep chasm was reported in the back garden of a suburban property in Croxley Green, near Watford in Hertfordshire, on Sunday. A house and three flats were evacuated.

Seventeen homes were evacuated after a 35ft-wide hole opened up on the corner of a residential street eight miles away in Hemel Hempstead.

Motorists on the M2 suffered days of chaos after a huge void appeared in the central reservation, closing a 10-mile stretch of the motorway near Sittingbourne.

In Barnehurst, southeast London, another huge sinkhole appeared in the back garden of a home a few feet from a child’s trampoline.

And earlier this month, a sinkhole measuring 30ft-deep swallowed a car after opening on the driveway of a house in High Wycombe.

There are usually around 20 sinkholes a year in the UK, although many may appear in rural areas and go largely unnoticed.

Experts are blaming the weather which has seen record levels of rainfall during December, January and February.

The rainwater turns acidic as it absorbs carbon dioxide in the air or combines with decaying plants, and dissolves rocks like chalk, limestone and gypsum.

Underground cavities become bigger, and as heavy rain makes surface layers of clay or gravel heavier, they can no longer be supported and collapse into the space below.

It is difficult to predict where sinkholes will appear but areas where activities like mining have created man-made holes tend to be more vulnerable.

This entry was posted in Pictures and tagged Magdelen's Close, sinkhole, Yorkshire. Bookmark the permalink.