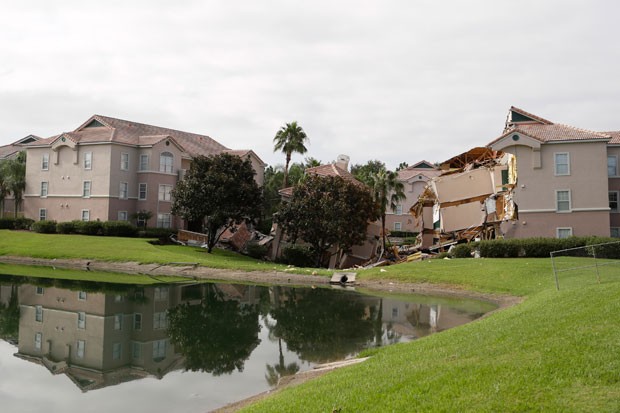 Just in from our Santa Monica correspondent: Dozens of people were forced to evacuate from their resort near Florida’s Disney World when a 60-foot sinkhole caused a section of the resort to collapse Sunday night.

Guests at the Summer Bay Resort in Clermont, Fla., reported the incident when they heard cracking sounds and windows shattering around 10:30 p.m. Sunday. Authorities said all of the guests in the villa that sank and guests in an adjacent building, about 35 people, were evacuated before one building in the complex began to crumble and that no one was injured, according to CNN.

“No doubt there would’ve been injuries if they hadn’t gotten the building evacuated,” said Paul Caldwell, the resort’s president, during a news conference.

About 30 percent of one villa collapsed around 3 a.m. Monday morning, while another portion of the three-story resort was sinking, The Associated Press reported.

Luis Perez, who was staying at the resort, told WFTV that he saw firefighters and police outside when he went to report a power outage around 11:30 p.m.

Another couple and their child escaped through a window after the door frame in their room collapsed, witness Maggie Ghamry told WFTV.

“There were windows breaking everywhere. One woman was sitting in the tub and the tub levitated and that’s when she just grabbed a pair of shorts and came out with nothing,” Ghamry said. “So, it was the most surreal experience I never could have imagined in my wildest dreams.”

All of the guests were evacuated and relocated to other buildings on the resort’s property, but about 20 people left behind items such as car keys, medication and other personal belongings, the Orlando Sentinel reported.

“Our goal is to have everyone have a great vacation for the rest of the week,” Caldwell told reporters. “We’re going to do everything in our power to see that that happens.”

The extent of the damages is unclear, as firefighters are waiting for engineers to assess the building.

This isn’t the first time a sinkhole has caused damage in Florida. Sinkholes have been popping up throughout Florida as recently as June, and are particularly frequent in the Tampa Bay area. The Orlando Sentinel reports that sinkholes cost residents millions of dollars each year due to structural damage and insurance costs.

Sinkholes occur when soft limestone below the ground’s surface dissolves and collapses. This process can be sped up by construction or a drought followed by heavy rain.