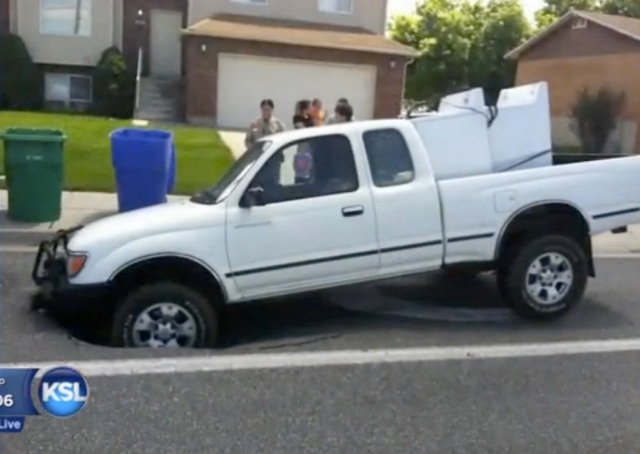 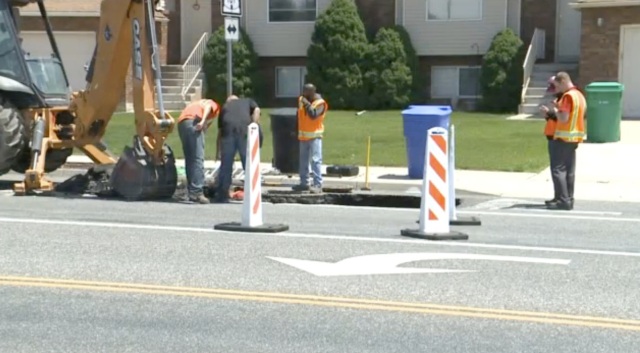 A driver got an unpleasant surprise in West Point Wednesday when a “cavernous” sinkhole opened up as the driver’s pickup drove over it.

Davis County Sheriff’s Sgt. Susan Poulsen said the 5-feet-wide sinkhole was 8 feet deep, and the only thing holding up the remaining asphalt was a pipe. Fortunately, the truck that encountered it while trying to turn right near the intersection of 2000 West and 300 North suffered no damage.

“That was really something,” said Geraldine Farrell, who witnessed the aftermath of the sinkhole. “You just don’t think about it and you go too fast — it would be a real disaster if the earth opened up and you dropped your car into it.”

Utah Department of Transportation spokesman Vic Saunders said an underground irrigation pipe was the culprit behind the sinkhole.

“Apparently a leak developed in that pipeline,” Saunders said. “There was washing caused around the pipeline itself — washed the dirt away, and then that created a void.”

Saunders said UDOT does regular pipeline and culvert inspections, but sometimes problems don’t become evident until they come to the surface.

“We don’t want them to happen,” Saunders said.

Freshly-filled dirt covered the area Thursday, and Saunders said the sinkhole was expected to be completely repaired on Friday.

The Wasatch Front has already seen its share of sinkholes in 2013. A sinkhole at 5400 South and 3200 west happened April 26 after a water line broke.

“Generally sinkholes that are along roads are associated with an underground utility like a broken water main,” said Utah Department of Natural Resources senior geologist Rich Giraud.

Do those recent events mean much of Utah is built on unstable ground? Scientists say no.

“It’s much different than a bedrock situation where we have sinkholes that are evolved from the dissolution of the rock itself,” Giraud said.

Those are the sinkholes, Giraud said, that swallow entire cars and houses, and seem to happen most frequently in Florida.

“Probably a good way to think of it is Swiss cheese,” Giraud explained. “It’s really Swiss cheese, and every now and then one of these caverns migrates to the surface and you get a sinkhole.”

Scientists say there are areas of Utah that have that kind of land, like southwestern Utah. Even the Timpanogos Cave in Utah County is an example of dissolution. Still, Giraud said most unstable areas are away from the population center.

“A lot of cases are mountainous areas and there aren’t necessarily people there,” Giraud said.

This entry was posted in Pictures, Vehicle v Sinkhole and tagged sinkhole, Utah. Bookmark the permalink.