Bill Verdon said, there’s been a creek in the area of the Rockledge community in South Londonderry Township. 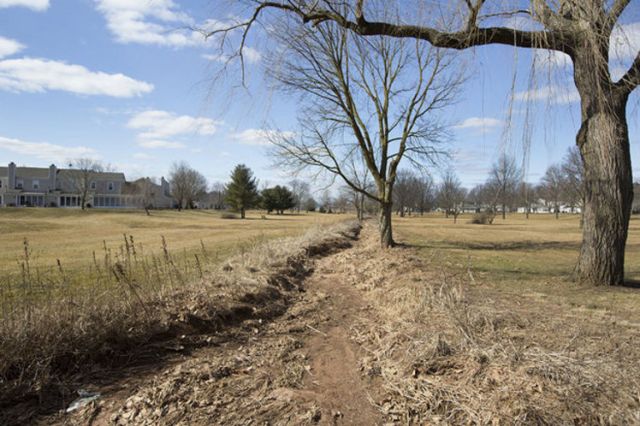 That was until last week, when the small creek began to inexplicably dry up.

By Thursday, there was little water left in the community’s duck pond, where a few forlorn mallards were still holding on. The tiny creek bed itself was almost bone dry.

“Boom! It was gone overnight,” said Verdon, who is the community’s maintenance and grounds manager. “It’s hard to believe, but seeing is believing. We had droughts where it would be a trickle, but there was always something coming through.”

It was, he said, a mystery.

The body of water in question is named Spring Creek, and flows from Campbelltown north through the development into Hershey, where it eventually meets with the Swatara Creek on the grounds of the Hershey Country Club.

This Spring Creek should not be confused with Spring Creek in downtown Hershey, which is a separate, larger creek.

Nor is it a raging river, as the path it cuts through Rockledge can be jumped across.

But it is part of the community, so Verdon decided to try and figure out what was going on.

He went upstream, walking through Rockledge and across a nearby farm lane, into adjacent corn field along Lingle Avenue.

There, he found the culprit.

The stream, he discovered, had been swallowed by a massive sinkhole.

It measures about 40-feet wide, maybe 20-feet across, with a depth of 10 to 15 feet. Spring Creek, which used to flow in a shallow creek bed through the area, has formed a miniature waterfall, spilling dramatically into the hole.

From there, it appears to go underground to parts unknown. The property is owned by the Milton Hershey Trust, which has a geologist investigating the hole and how best to fill it back in.

The area is prone to sinkholes – Verdon said the residential community has had to fill in a number of them over the years. That has concerned the homeowners of the community. After all, said Eugene Snesavage, president of the Rockledge Homeowners Association, all that water’s going somewhere.

Sinkholes in the area are largely due to the geology of the region.

Verdon’s hole is in vicinity of the contact between the Epler and the Stonehenge geological formations, said Bill Roman, president of the Harrisburg Area Geological Society.

The two formations, Roman said, are believed to have formed between 485 to 443 million years ago. They are marked by a fractured limestone structure, which acts as a natural pipe system for underground water.

Verdon said he thought the stream might be draining into Indian Echo Caverns in Hummelstown, but that’s unlikely, said a DCNR geologist, given the distance from the creek to the cavern.

Most likely the water is following existing cracks in the limestone. It would be impossible to guess where it is going without trying to track the water’s flow. That’s typically done by dropping a dye marker into the stream and seeing where it re-appears.

The most probable solution is to simply fill the hole back up, and Spring Creek will be allowed to resume its course though the development.

The ducks, no doubt, will be pleased.

This entry was posted in Pictures and tagged Pennsylvania, Rockledge, sinkhole. Bookmark the permalink.