A bad one just got worse: 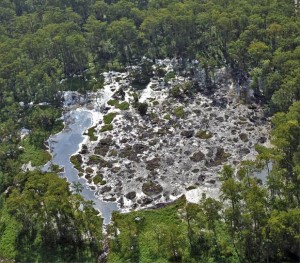 A non-government group is urging Bayou Corne sinkhole area residents to use a new record log as a veteran radiation expert says Louisiana environmental officials are “in denial” over hazards posed by elevated radium levels that are actually fifteen times higher than the state limit, a “worst nightmare coming true,” according to an environmental attorney.

Stanley Waligora, a New Mexico-based radiation protection consultant and leading authority on health risks of naturally occurring radioactive material (NORM) has confirmed that radium levels at Bayou Corne’s sinkholeare not within safe limits, but instead, roughly 15 times higher than the state’s acceptable level, according to one of the nation’s leading environmental attorney’s Stuart Smith.

State officials are saying NORM is is below hazardous levels, but the independent findings indicate other actions need to be taken, including residents using Louisiana Environmental Action Network’s report logs to record signs and symptoms of ill health.

The information about radium is buried in a state news release, poorly written, “and goes out of its way to downplay the results,” Smith said Wednesday.

This week, after state officials released the results of samples taken 80 feet under the surface of the growing, slurry-filled pit, Marco Kaltofen, a civil engineer and president of Boston Chemical Data Corp., noted those results posted by the Louisiana Department of Environmental Quality, or DEQ, show elevated rates of NORM in the sinkhole.

NORM is a frequent byproduct of the oil and gas drilling process, creating wastes that industry has often then dumped improperly, according to Smith who specializes in this area of environmental law.

Kaltofen’s analysis of the situation in Bayou Corne includes:

“Radium in the body is absorbed because it is chemically similar to calcium. The normal maximum guideline level for radium in surface water is 5 picoCuries per liter, (pCi/L). The state’s testing found 82 pCi/L in the water of the growing sinkhole. Radium gives off alpha’ radiation. This form of radiation is extremely dangerous if inhaled or ingested, and less dangerous if exposed by skin contact.”

When radium decays, it produces the dangerous radioactive gas, radon. EPA warns that radon gas causes lung cancer, and exposure can be as hazardous to your lungs as a serious cigarette habit.

“Waligora said officials with the Louisiana Department of Environmental Quality need to launch immediate additional testing to ensure that the hazardous radium is not leaking into nearby groundwater and posing a threat to human health as well as livestock,” Smith has stated Friday.

LEAN, after reporting lethal contaminants found in the sinkhole area, is urging residents to use the new report log it has for recording signs and symptoms of poisoning, as reported by theExaminer on Wednesday.

The Advocate reports Friday, “In two statements released Tuesday, LEAN noted air monitoring by the Louisiana Department of Environmental Quality since Aug. 4 over the sinkhole and in the neighborhoods near the sinkhole had picked up, depending on the location, benzene, toluene, ethylbenzene, other volatile organic compounds and components of natural gas.”

If the butane in the sinkhole vicinity exploded, it would meet, according to the National Terror Alert, the definition of a dirty bomb.

“I sought an analysis of the recent DEQ test results from Waligora, who since a stint as a nuclear weapons officer in the U.S. military has been teaching, consulting and testifying as an expert witness in radiation litigation for more than 45 years,” asserted Smith Friday.

He expressed concern that the state reported its findings of radium-226 and radium-228 as “below acceptable levels,” when in fact, the results were 15 times higher than the state’s own standard for soil contamination.

“Well, once again the Louisiana DEQ is in denial because they don’t know what to do about the radioactive contamination in the Bayou Corne subsidence,” Waligora wrote, adding the following findings:

There are immediate radiation dose concerns, not only cumulative toxin concerns.

“The release could reach the usable aquifer and contaminate drinking water along with livestock and irrigated crops,” Waligora says. “The DEQ must sample ground water to assess any transport. Airborne particulate might become entrained and cause contamination to be inhaled by the public. DEQ must collect air samples to assess the airborne radioactive particulate. Radon gas emanating from the radium could be inhaled by members of the public. DEQ needs to monitor airborne radon.

“A long range plan must be developed for remedial action. Funding should be provided by the oil companies that used the cavern for disposal,” asserted Waligora.

Waligora reports being concerned about DEQ understating of the Bayou Corne risks because of what he has witnessed in other cases handled by the troubled agency:

“This is reminiscent of the illegal waste disposal that was discovered several years ago at St. Gabriel. The community complained about illegal disposal of radioactive waste. DEQ sent a team to investigate who determined that there was no problem. Complaints continued and a second DEQ team investigated and again said that there was no problem. Finally, a legal action attracted the EPA who found widespread contamination. The responsible party had no worth so the site was cleaned up with Superfund support. The cleanup took over one year and cost over $1million. Quite a bit for ‘no problem.’

Earlier this year, Smith joined the Louisiana Bucket Brigade in calling for the EPA to intervene and assume responsibility from DEQ because the agency was “overwhelmed and “in the back pocket of the businesses it’s supposed to be regulating.

“Although company officials informed the Louisiana Department of Natural Resources in early 2011 of significant problems at the cavern, local residents and authorities were not told of the risk even after they began complaining this summer of shaking homes and noxious orders,” Smith says.

National Terror Alert (NTA) recently reported that due to recent terrorist events, people have expressed concern about a possible terrorist attack involving radioactive materials, possibly through the use of a “dirty bomb,” and the harmful effects of radiation from such an event.

The NTA developed a dirty bomb fact sheet including:

“In Bayou Corne, we are witnessing our worst nightmares coming true,” Smith asserted Friday. “It’s time for the EPA and other outside authorities to step in and make sure that proper testing is done and that emergency measures are carried out.”

The sinkhole, now the size of three football fields, shaped like an upside-down Superdome Stadium, and filled with liquid slurry is blamed on Texas Brine Co.’s failed salt cavern near Bayou Corne.

“There’s no excuse for allowing this new Louisiana catastrophe to get any worse,” Smith says.

This entry was posted in Pictures and tagged Bayou Corne, Louisiana, radioactive, sinkhole. Bookmark the permalink.