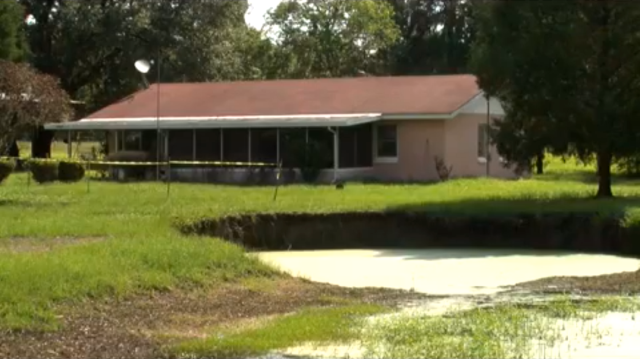 Flood waters from Tropical Storm Debby forced an elderly Central Florida man from his home.  Now, three sinkholes have swallowed his front yard and are just feet from his house.

Back in June, two good Samaritans, Josh Sanchez and Luis Santana, saved the homeowner, 84 year-old Troy Fielder from the high water.  Now, three giant sinkholes are in his front yard.  One swallowed an oak tree.

Harold Borza works at the golf course across the street. Borza said,  “I been down in Florida since ’77 and I never seen this much rain at one point in time. I feel sorry for the guy. I mean what can you do? It’s Mother Nature. You can’t do nothing about it. Can’t stop the rain.”

Jay Silver with Helicon Foundation Repair, in Tampa, says across the country, you’ll find one of the highest concentrations of sinkholes here in Florida and summertime is the peak season for the depressions.

He says there are common signs you can look for.  “Depressions in the ground or anything opening. That could cause the solid to become unstable, where it could cause the house for you to have some stair step cracking or movement. Windows or doors could be hard to bind.”

Fire officials tell us dealing with the sinkholes in Fielder’s yard is ultimately his responsibility, unless they encroach on county property. The Red Cross, who temporarily put Fielder in a hotel, says he’s since moved out of the region.