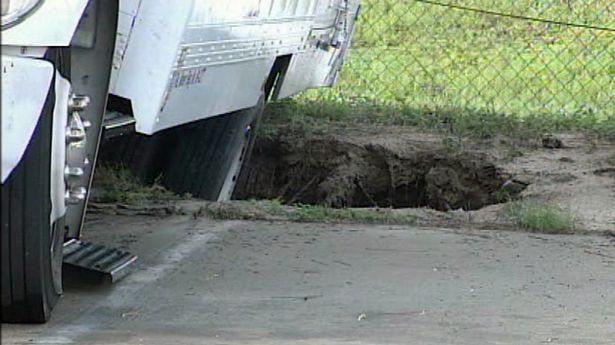 Some of the worst damage caused by Tropical Storm Debby that WFTV found on Monday was in the city of Ocala.

A United Van Lines truck was teetering on the edge of the hole near Southwest 52nd Terrace and Southwest 42nd Street.

Reporter Berndt Petersen received information on a large sinkhole that opened up near a condominium complex and caused an evacuation to part of the building.

Police said they moved some of the residents out and they brought the bulldozers in.

“My friend sent a text and said they had seen it, and people were starting to evacuate,” said Brittany Laxton, Fore Ranch resident.

Residents in the condos nearest to the 100-foot-long hole were ordered to leave.

“The old bridge worked.  You have to slow down.  It saves lives.  This thing is a joke,” said Marion County resident Jesse Price.

In Ocala, workers distributed hundreds of sandbags at Tuscawilla Park.

Sharon Cook said her pool is a mess.

There was flooding in the Heritage Hills neighborhood, and 18th Avenue was under nearly two-feet of water.

Shirley Fielitz said she hopes the pumps will get rid of it.

“I hope so, because I don’t drive.  But I have people pick me up, and I have two doctor’s appointments next week,” said Fielitz.

Fore Ranch residents said they remember the last time a big hole opened there, just over a year ago.

“I’ve been told by our landlord it was possible, and they were trying to make sure it wasn’t happening, and it did. And it’s a little scary to think that,” said Laxton.

Some smaller holes have also opened out there, and several Ocala streets had to be closed Monday because of flooding.