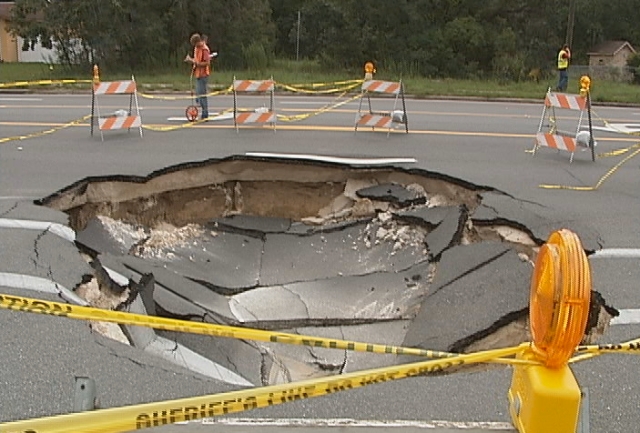 Sinkholes seem to be swallowing up more and more parts of Hernando County.

There are sinkholes all over the place in part of the Trillum subdivision in Hernando County.

There are about 20 so far and that number could grow. Some are away from homes and some are too close for comfort.

Hundley lives in one of about 23 or more homes threatened by the sinkhole outbreak. She and her family have been told to pack up and leave.

“They told us we could possibly lose our homes over here because so many of them have opened,” Hundley said.

Part of Kelly Gregoire’s backyard has caved in. She and her family are prepared to leave.

“Yeah we are prepared now but still in shock and I don’t think you are ever prepared for this,” Gregoire said.

Sinkholes are causing problems in other neighborhoods too.

Mariner Boulevard and Quality Drive are both shut down but repairs should start soon.

“I’m hoping, oh God please because our homes are all any of us have,” Hundley said.

Airport officials say a few sinkholes have opened up and damaged part of a taxiway but the airport is open and the runways are fine.

Also several roads around the county remain closed due to flooding.

This entry was posted in Pictures and tagged sinkhole, Tropical storm Debby. Bookmark the permalink.