The occupants of two small SUVs that pulled into an Interstate 4 rest area near Polk City got a huge surprise Thursday morning: Their vehicles had fallen into a sinkhole.

One of the sport utility vehicles was pulled out fairly quickly because it wasn’t completely in the hole, said Florida Department of Transportation spokeswoman Cindy Clemmons. The other took longer because it had fallen in completely, and crews were concerned a tow truck might fall in, too.

After experts determined the ground was safe, the second SUV was pulled out about 3 p.m., Clemmons said.

Both vehicles were towed away.The first one pulled out soon was drivable, Clemmons said.

No one was hurt, and the rest area at mile marker 46 remains open, but transportation employees are directing motorists away from the sinkhole.

Clemmons said crews are working to determine how big the hole might get and the size of the void under it. That work was expected to continue today. Then, Clemmons said, crews can figure out how to fix the problem.

West Central Florida is no stranger to sinkholes.

Two Plant City firefighters recently were recognized for the dramatic rescue of a woman who fell into a sinkhole in her backyard on March 28.

In September, Hillsborough County officials announced they had finished repairing the yawning sinkhole that formed in an embankment at the Southeast County Landfill 10 months ago when the ground collapsed into a 60-foot-deep, 129-foot-wide crater. 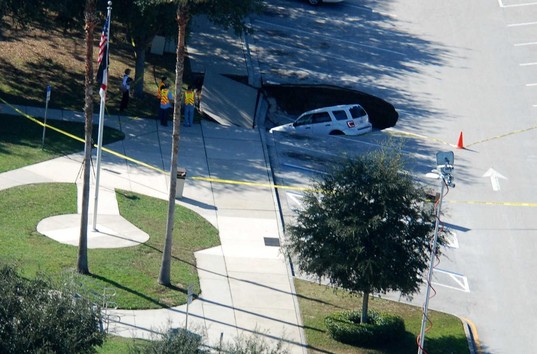 A year and a half ago, a 25-foot-wide, 40-foot-deep sinkhole opened at the front door of a Bordeaux Village condominium building in Tampa.

And nearly two years ago, Plant City was inundated by sinkholes when the aquifer level plummeted, lowered by strawberry farmers who ran sprinklers to protect fragile strawberry blooms during a prolonged cold snap.

Dozens of sinkholes opened in the area, including one that closed three lanes of traffic on eastbound Interstate 4.