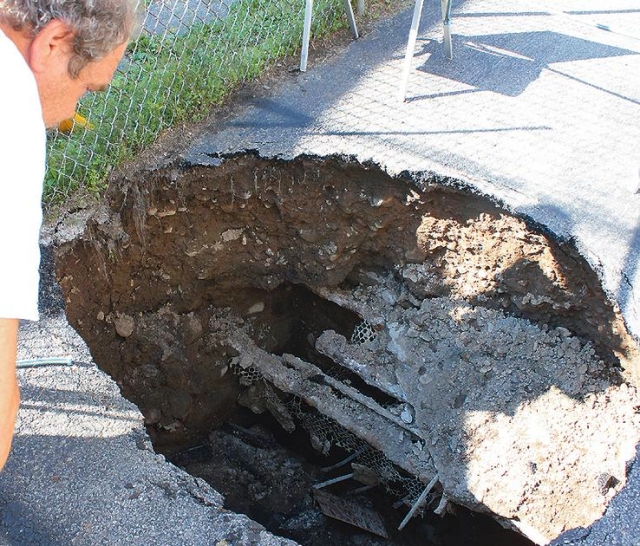 A despairing Harrison Avenue resident does not know where to turn for help after a large and gaping cavity swallowed up a portion of his driveway this week.
Sam Chandler, who has lived for about 10 years at the 1 Harrison Ave. residence that he shares with life partner, Sheila Hurd, said he first noticed a golfball-sized hole about halfway up the paved roadway about two months ago.

A call to Allstate, the company with which he has homeowner’s insurance, was not helpful, he said, as he reportedly was told the event was an act of nature and not covered.
On Monday the sinkhole, which had gradually been widening, turned into a five-foot by five-foot by nine-foot monster that opened up under the front of Hurd’s car. He had to back the car away from the edge of it, he said.

Ilion Department of Public Works Superintendent Jack Sterling said the hole, which is on private property, has “nothing to do with village water or sewer systems.”
In his view, it is an old well or septic tank system, which had a concrete cover that deteriorated.

“It’s totally the homeowner’s responsibility,” he said.
As Chandler and his neighbor, Kathleen Kennedy, talked over a chain-link fence on the edge of the crater, they agreed that pipes running parallel to the street and rebar poking out of crumbling concrete supported Sterling’s theory. The stone wall and cubed base and sides of the cavernous opening also gave credence to the theory.
A return call to Chandler’s insurance company late Wednesday afternoon was no more helpful than his first call for assistance, he said.

“I don’t know what to do,” Chandler said.

He said a friend has provided him with a $300 estimate for 10 tons of gravel fill for the hole, but Chandler would like to know the extent of the problem first, as the cavity seems to be spreading to Kennedy’s side of the fence.
He’s hoping someone might be able to provide him with some assistance.

This entry was posted in Pictures and tagged Ilion, New York, sinkhole. Bookmark the permalink.