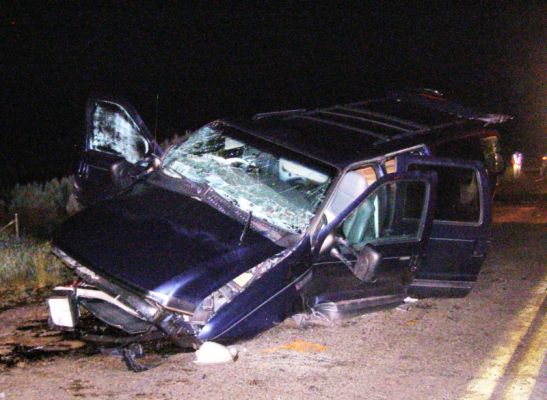 A 15-year-old girl died after heavy rains caused a huge sinkhole to open on a Utah highway, swallowing one vehicle and causing her father’s SUV to careen off the road.

Authorities said the crash that killed Justine Barneck and injured her father, Michael Barneck, late Wednesday night happened when the road collapsed in front of them, leaving a patch of asphalt on the edge of the hole that the vehicle hit, causing the fatal accident.

At about the same time, a second car actually went into the 40-foot-wide, 30-foot-deep hole, said Utah Highway Patrol Corporal, Todd Johnson. The driver of that vehicle, 37-year-old Helen Paulson, was hurt, but the extent of her injuries was not immediately clear.

The accidents near Tabiona, about 90 miles east of Salt Lake City, came about 15 minutes after a heavy storm began at about 11:30 p.m., quickly overflowing a clogged culvert and washing out the two-lane state road, Johnson said.

Michael Barneck was taken to a hospital with head injuries and is expected to be released Friday.

Justine Barneck was very close to her family, especially her twin sister, Jentri, who was not in the vehicle, said older sister Jamie Allred.

“She was an absolute angel,” Allred said.

Allred said her sister’s death was deeply felt in Tabiona, a town of a few hundred people at the base of the Uinta Mountains. She said the family has strong roots in the community, where one school holds kindergarten through high school students.

“She was more than willing to help anyone. I don’t think there could be many 15-year-olds like her … she was perfect from day one,” Allred told The Associated Press.

The highway will remain closed while repairs are made and traffic is being diverted.