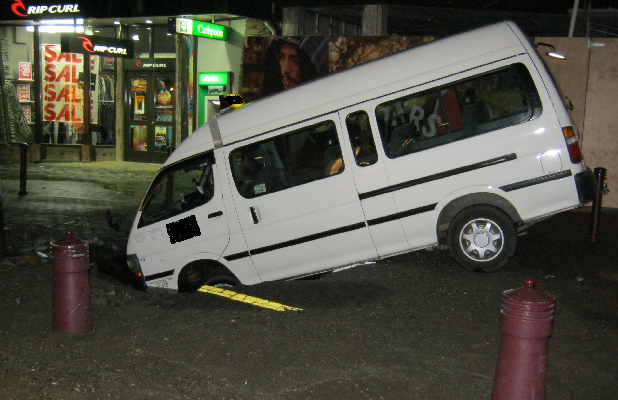 Substantial flooding from a burst water main caused a taxi van to nosedive into a sinkhole and left a large mess in central Queenstown yesterday morning.

An underground water main burst about 4am, and contractors had to waterblast footpaths and suction and shovel the excess dirt.

Workers backfilled holes and the road was closed until lunchtime while they cleaned up.

He said he thought the Toyota Hiace van would make it through the flood but the hole kept getting bigger.

Repairs and the cost of a tow truck would be about $1000.

“You don’t expect the street to collapse underneath you,” MrCoppola said.

Shops on Beach St escaped unscathed but those on Rees St had water lapping at their entranceways.

Unichem Wilkinson’s Pharmacy owner Kim Wilkinson said the amount of water on the street was amazing and it would have been at least 30cm deep.

“Eichardts (hotel) called me in because the flooding was very close to our doors, as it was with the rest of the street.

“The water was lapping up against the BNZ’s walls,” MsWilkinson said.

Witness Preston Rogers-Brown said there was a huge amount of water coming out of Beach St, as well as sediment and silt.

“I looked down to the intersection of Beach and Rees streets, which was full of water, and when I walked around the corner to Rees St it looked like it has in other floods caused by the lake,” he said. “You could tell it was a burst water main by the amount of water flooding out.”

A few intoxicated bystanders watched on.

Staff at Pog Mahones bar, which appeared to be the worst affected from the street, said they were not around when the flooding happened and the pub was not damaged.

Beach St was closed again overnight but was expected to reopen by 7.30am today.