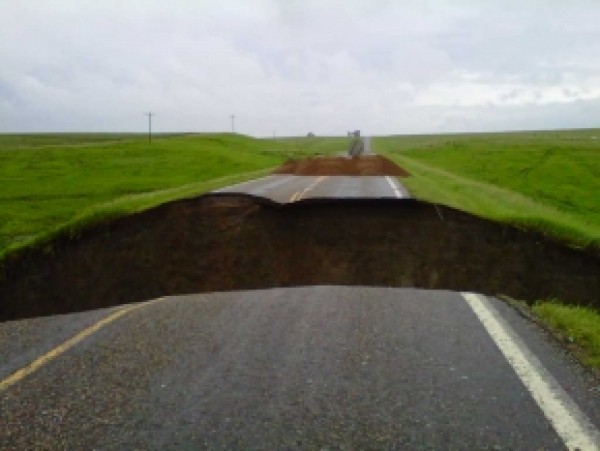 But it happened Tuesday morning in Lyman County.

All of it unfolded about 10 o’clock on Tuesday morning in central South Dakota. The area in question is a highway just north of Reliance. Torrential rains led to high water near the highway and that water weakened the road, creating a sinkhole.

Longtime Lyman County residents tell us they’ve never seen anything like this.

All that remains now of tribal Highway 10 is a canyon as flash flood water carved their way through Lyman County.
“I’ve never seen anything like this before, I mean I don’t even know what to say I’m speechless.” Sheriff Steve Manger says this ravine is normally just a watershed creek and hardly ever has water running through it. Today, that’s obviously not the case. Overnight rains pounded the county and around 10 this morning water continued to higher and higher next to the roadway. A line of reeds and debris can still be seen on the ravine and give a slight glimpse just how high the water was forced back. “The water level, it’s just an estimate was at least a good 40 feet of water! There’s just so much rain that we’ve got over the past couple days and the culverts couldn’t keep up.”

Water poured over the road and two drivers attempted to cross the flooded roadway, not knowing that the ground beneath it had been washed out.

The driver of the van has been identified as a 56-year-old Chamberlain woman and was found by emergency responders dead inside her vehicle.

The driver of the car has been identified as a 61-year-old woman from Lower Brule. Her body was found four miles down stream around 4 o’clock this afternoon. Sheriff Manger has served more than twenty years in both law enforcement and as a member of the fire department but he says today’s accident is a completely new experience. “This is the first time I’ve ever seen anything like this before it’s just amazing the force of Mother Nature… it’s just a sad, very sad deal. Emergency management has issued a no travel advisory for gravel roads in the county and want drivers to be aware of the high water next to all the roads as more could become flooded. With the rain coming we have several problems throughout the county, now we’re looking at flooding in the Oacoma area so we’re keeping a close eye on that and trying to do the best we can.”

And do their best to prevent tragedies on the road from happening again.