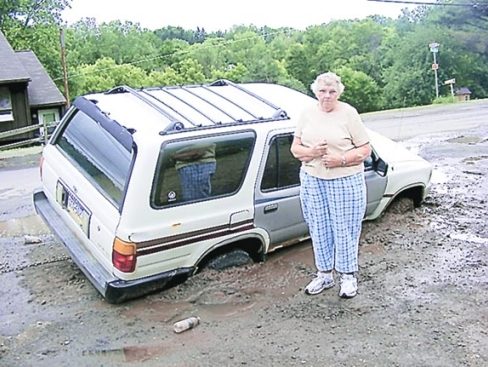 Sheila Zurn of Gillett had a sinking feeling Tuesday.

After moving off South Railroad Street around 12:30 p.m. in Troy to avoid another car “hogging” the street, her vehicle went onto a private parking lot – and into a sinkhole.

Bristol Excavating in Troy pulled out her SUV from the sinkhole, which was in a parking lot across from Sugar Creek Apartments. There were a few spectators at the scene.

“I think someone needs to find out why it’s a sinkhole,” she said.

When asked for comment, borough manager Dan Close said, “We had been informed previously about the water constantly in that area. We tested the water for chlorine and it tested negative. Borough water in that area would be chlorinated. We have not had any complaints of low pressure and the water line there is on the other side of the road. There is no sewer line there. To the best of our knowledge and from our determinations we did not feel this was a borough problem, but rather a private property issue.”

Zurn was in the borough to visit her aunt, Mildred Bristol of Paine Street. Bristol said she heard there have been at least seven cars stuck in the sinkhole before.

Meanwhile, Zurn watched as her vehicle was pulled from the mud.