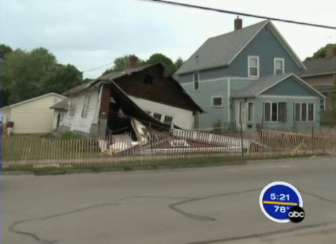 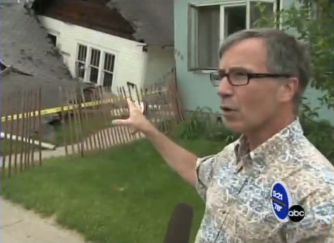 A house in Clinton, Iowa, “creaked and groaned” when a sinkhole swallowed it, a neighbor said.

Larry Stuart was not home when his dwelling collapsed Sunday, but the property is a total loss, officials told WQAD-TV, Moline, Ill. He is staying with relatives.

Neighbor John Montieth said: “We could hear the house creaking and groaning and popping. Somebody said we better get away in case glass starts breaking, so we went across the street.”

“Significant rainfall that we had Sunday morning was probably the No. 1 cause,” said Michael Harmon, a local building official. “Although it looks like there could have been deficiencies in the foundation that was built about 15 years ago.”

Stuart’s neighbors are staging a fundraiser for him, and an emergency demolition is planned soon.

“I would not have wanted to be in that house when it came down,” neighbor Karl Wolf observed.

A sinkhole nearly swallowed a century old Iowa home causing the house to slide off its foundation. No one was home when the house came crashing down. One neighbor says the house made quite a bit of noise before it gave way.

You could hear the house creaking and groaning and popping and somebody said, “We better get away before glass starts breaking,” so we went across the street.

City officials say the house is a total loss and will be demolished. The home’s elderly owner is staying with relatives for now.