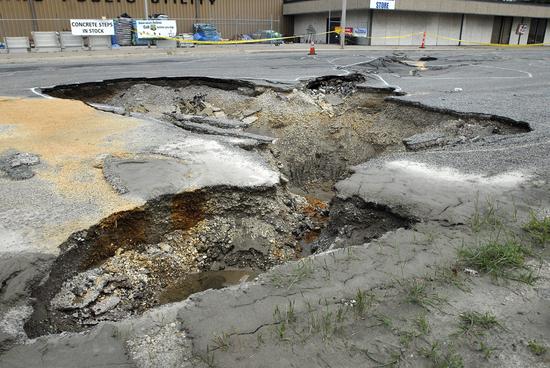 Commercial Avenue and sections of Martin Luther King Jr. Street are among the most heavily damaged blocks. The 400 block of 14th Street is closed as a sinkhole covers the entire width of the street. The same is true at 11th Street and Commercial Avenue, where several sinkholes and breaks in the pavement have blocked any traffic in front of the Cairo Public Utility building.

Other damaged streets include 15th Street and Cedar Street, 15th Street and Poplar Street and the 1800 block of Washington Avenue. Evaluations of damages to public buildings were not complete Tuesday, and Coleman wouldn’t release to the media the name of a special projects manager working to complete the list of damages.

Cairo Public Utilities assistant manager Glen Klett said he’s seen the large sinkholes in front of the building on several occasions. They happen as a result of high groundwater flow and occur, Klett said, in the same location during almost every flooding event. He expects the situation to get worse as river levels continue to drop.

He added that after past disaster events, FEMA offered aid to restore the damaged sections of road to the state they were in before the flooding.

“There’s never been a complete fix,” he said.

According to Jeff Denny, an Alexander County Highway Department engineer, damage to county roads is widespread.

“We have at least 25 miles of road underwater right now, so we don’t know exactly what we’re going to have,” Denny said. “We’re still hauling sandbags and then doing some debris removal in those areas.”

In the meantime, Denny is trying to get familiar with exactly what sort of the damage the county is dealing with so he can report them to agencies like IEMA. Denny and other county officials met Tuesday afternoon to organize a list of damages.

“We had a lot of roads that were washed out. We got in trouble with culverts and bridges, too, that will need to be repaired. And there’s a lot of cleanup to do,” he said.

Thirty percent of the county’s roads are gravel, and many of them are washed out or still covered with floodwaters.

IEMA officials said they had not completed their public assistance assessments in Alexander County, as crews began the evaluations Monday.

Thompson said with five IEMA assessment teams on the ground, who are working with FEMA officials, they hope to complete an inventory of expenses related to emergency protective measures, road and public facility damages by the end of this week.

“We’re trying to do this as quickly as possible. We wouldn’t want somebody to be left out because they didn’t have all their information,” Thompson said.

This entry was posted in Pictures and tagged 400 block of 14th Street, Cairo, huge sinkhole, Illinois, sinkhole. Bookmark the permalink.