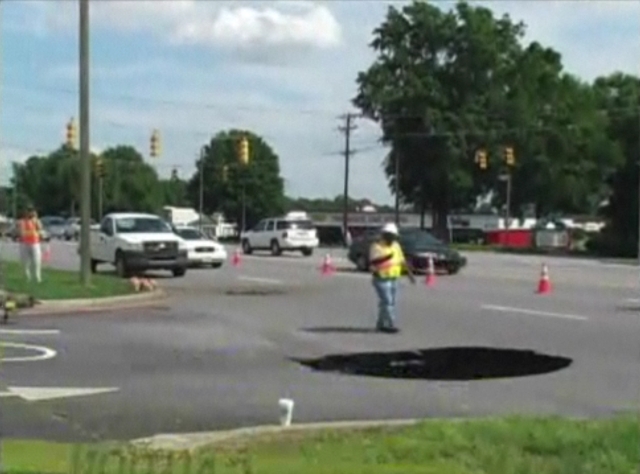 A sinkhole opened on U.S. 70, SE, at about 2:45 p.m. Thursday across the street from the Valley Hills Mall.

The hole was about 12-feet across and about 18-feet deep. It destroyed a portion of the outside lane on the westbound side of U.S. 70 and the main entrance to Judges BBQ Express.

Judges BBQ General Manager Shelby Ozmun took the situation in stride and said his restaurant would remain open during its normal business hours. Then he changed the sign in front of the restaurant to read, “Ask about sinkhole special.”

“The special is $2 off the Big Pig Combo – that’s eight ounces of pork, two sides and a choice of hush puppies or a roll,” he said.

As Ozmun entered the restaurant, workers with the state Department of Transportation and the city of Hickory worked to determine the extent of the damage and what caused the hole to open up.

“There was a drain box here that collapsed,” said a DOT employee. “It’s not that big of a deal it’s just a problem because of where it’s at.”

Something eroded the soil from under the catch basin and when it failed, it ruptured the sewer line, said Assistant Public Services Director Kevin Greer of the city of Hickory.

The city of Hickory used a pump truck to collect the sewage east of the rupture to minimize the spill.

An 8-inch water line and a natural gas line were exposed when the hole opened up, but were not ruptured.

The city closed the westbound lanes and routed traffic through the turn lane. The eastbound lanes remained open.

“No one was hurt when the hole opened up,” said Mandy Pitts of the city of Hickory.

An excavator arrived on the scene at about 5:30 p.m. and began pulling away pieces of asphalt from the hole’s edges to stabilize it.

Engineers are working to determine the sinkhole’s cause before beginning the work to repair it.

Sinkholes are not new to Catawba County.

The most famous sinkhole in the area is the one that opened on the property that used to hold Buffalo’s Southwest Cafe on U.S. 70. That sinkhole first opened up in August 2002, in the parking lot of the restaurant, swallowing a Corvette. The sinkhole was repaired, but reopened in July 2005.