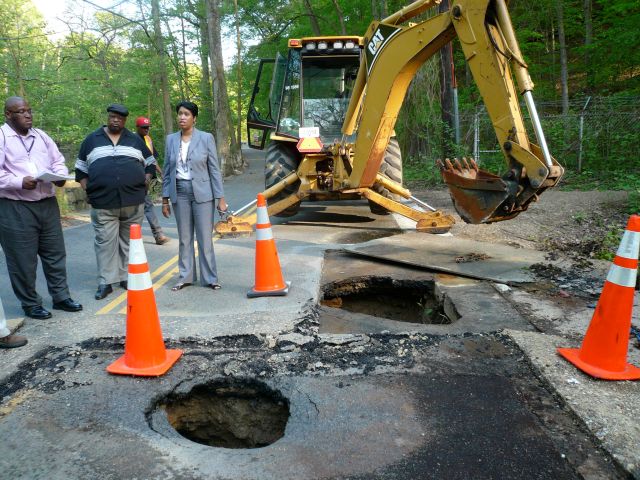 When Broad Branch Road closed on account of a second giant sinkhole that appeared over a culvert on April 14th, it wasn’t just another inconvenience. It was the potential for another decades-long battle to regain passage across Rock Creek Park.

“The last time I was told repairing a road in Rock Creek Park was complex was five years ago; that road is still closed,” Council member Muriel Bowser declared in a bellicose press release. “I will not stand idly by while Federal and District red tape amplifies the isolation of thousands of Ward 4 residents in Crestwood.”

She was, of course, referring to Klingle Road, which was closed “temporarily” when it washed out in 1991, and permanently in 2008. After much debate, it’s supposed to become a trail for walking and biking, and the mayor’s capital budget for 2012 does include a request for federal highway funds to get it built–20 years later.

Broad Branch, then, is the “only viable option” for commuters crossing the park–or was. One sinkhole has existed there, covered by a steel plate for many years. But a second one was too much; the whole road section is too unstable for the estimated 4,000 vehicles that use it every day. (The bigger problem: Such culverts exist all along the road; new sinkholes could appear with every rainstorm.)

Yesterday evening, Bowser, Councilmember Mary Cheh, and neighbors met at the site to figure out what might be done, and they weren’t happy with District Department of Transportation engineer Ronaldo Nicholson’s plan to have the road back open by September 1. He can’t move faster, he said, because of the number of signoffs he needs from the National Park Service, Army Corps of Engineers, and even the State Historic Preservation Officer (NPS officials at the scene insisted, rather defensively, that they’d be glad to approve permits as soon as they get design plans).

“If someone can get me carte blanche under an act of war, I’m ready to go,” said Nicholson, under fire.

But it’s not fast enough for the electeds, whose constituents are now walled off on their respective sides of the park!

Cheh put her amateur engineer’s hat on, and offered DDOT some suggestions for temporary fixes. Can’t they put a huge steel plate across the road section? Or sink pillars on either side and make a bridge across? The eroded culvert is still too unstable, Nicholson explained.

“Could you throw a bunch of stones under it?” Cheh asked. “We can take them out when it’s done.”

No, Nicholson said–the water would still back up into the park. “Well, so what?” Cheh asked. (Rock Creek Park’s superintendent shook her head and waved her hands in protest.)

Cheh was undeterred. “I’ve driven on roads all over the country. I’ve driven on wooden bridges,” she said. “They’re not the best, but they’re not supposed to be permanent.”