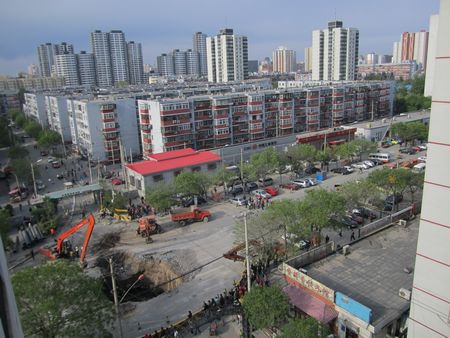 Workers block off the site of a sinkhole which occured overnight on Shiliuzhuang road, in Beijing. A section of the road collapsed beneath a truck, slightly injuring the driver and a passenger, who both jumped out the vehicle before it sank into the hole, as an authoritiy suspects the hole was caused by the construction of a subway line.

A section of Shiliuzhuang Lu collapsed in Fengtai district at 11:30 pm Monday beneath a truck, slightly injuring the driver and his father, the passenger, who both jumped out of the vehicle before it sank into the hole. The Legal Mirror reported on Tuesday that the hole is above a tunnel being dug for subway Line 10 construction.

An anonymous official from the Beijing Drainage Group (BDG), which dispatched workers to repair broken water pipes in the 20-meter-wide hole, refused to officially acknowledge a relationship between the construction and the accident, yet still commented, “How could there be such a big hole if there’s no subway being built?”

A Beijing Municipal Road and Bridge Maintenance Management Group official confirmed they are in charge of repairs but would not comment.

The group’s higher authority, the Beijing Municipal Commission of Transport, could not be reached.

According to BDG workers on the scene, they are pumping out water caused by leaking pipes, and will later remove the truck, which has sunk about 20 to 30 meters into the hole.

“The water pipe repairs will have to wait until after it’s lifted out,” the anonymous BDG official said.

Beijing Water Group supplies the water for residents of Shiliuyuannanli and community restaurants, where the supply has been cut off since on Tuesday morning. A local resident surnamed He said he hopes repairs will finish soon but that the disruption has not been “a big deal” so far.

Wei Jinglian, a senior engineer from the Beijing Institute of Geology, said it was too soon to blame the sinkhole on subway construction.

“It could have resulted from multiple causes: Water leakage from old pipes underground may have softened the soil, or there has been too much pressure frequently on the same section of road,” she said. “A hole 20 meters deep above a subway tunnel – that’s awfully rare in Beijing.”

Engineers at the site who said they are from BDG were conducting measurements to check for further land subsidence around the hole on Tuesday.