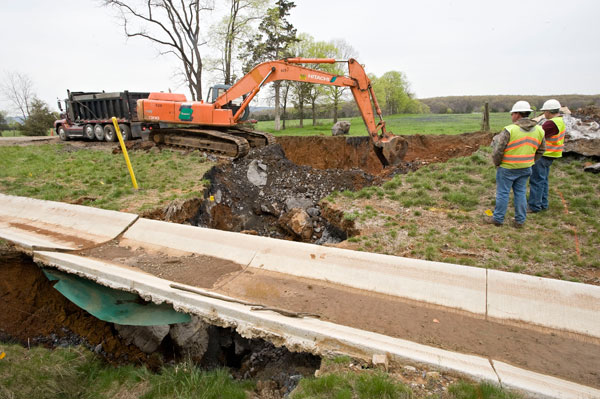 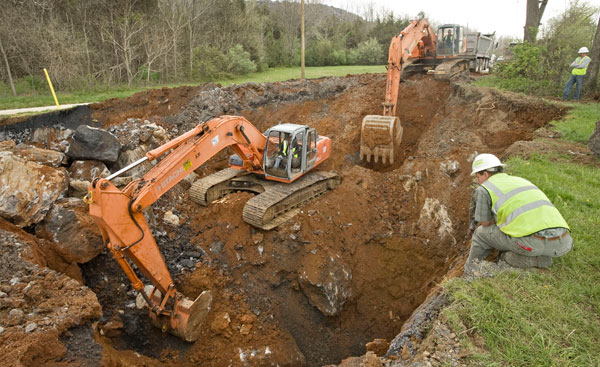 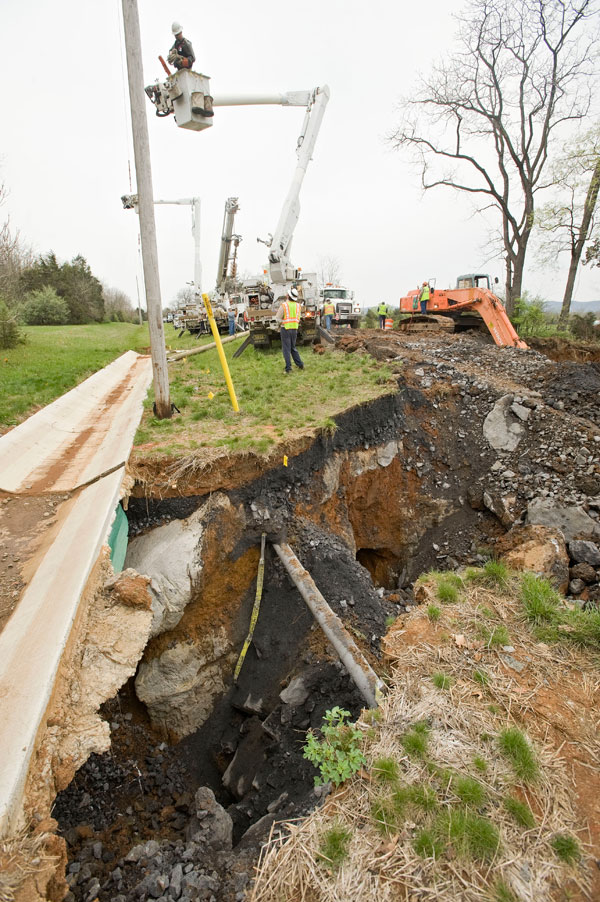 Excavating crews continued working Monday to repair a large sinkhole on Oranda Road, part of the damage left by Saturday’s flooding in the Northern Shenandoah Valley.

The obstruction was found late Saturday night less than a mile west of U.S. 11, near Carmeuse Lime & Stone, and crosses both lanes of travel, said Stacy Sager, the Edinburg residency maintenance project manager for the Virginia Department of Transportation. Oranda Road has been closed in that area since, and detours on U.S. 11 and Va. 55 have been established.

A sinkhole opened in the same spot in June 2009. That hole was 25 feet long, 50 feet wide and 25 feet deep on the west side of the road, and was across from a hole along the edge of Oranda that was repaired only a week earlier. The estimated cost to repair both was $250,000.

The high water table this spring, in addition to flooding Saturday, appears to have led to the roadway’s most recent failure, Sager said. The depth of the hole was not immediately known, but he said it’s going to be a “pretty good-sized” one.

“The problem is you’ve got to excavate until you find bedrock on all sides,” he said. “Then you go back in … and build things back up.”

According to VDOT’s Virginia 511 website, delays on Oranda Road can be expected until Friday at 7 p.m. It states that maintenance began Saturday at about 9 p.m.

“We’re going to work on it continuously until we get it repaired,” Sager said.

Across the area, portions of about 30 roads remained closed Monday afternoon as a result of the severe weekend storm, the website states. In Shenandoah County, the tally was approximately 20 roads early Monday afternoon, but went down later in the day.

An agency press release sent Sunday evening urged motorists to pay attention to barriers and road closure signs, and cautioned against removing them. Travel across closed roads should not be attempted, it states, and bridges are scheduled to be examined in addition to work conducted in flooded areas.

This entry was posted in Pictures and tagged big dig, sinkhole, Strasburg, Virginia. Bookmark the permalink.