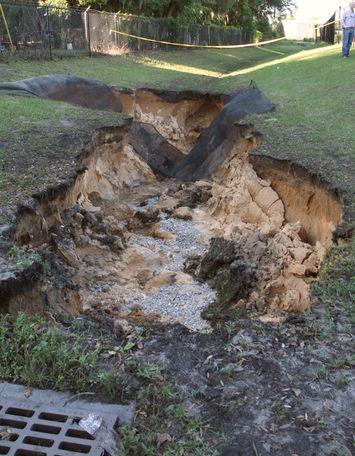 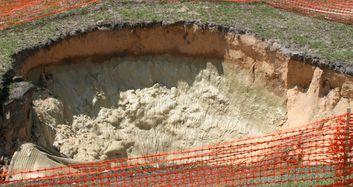 A 28-foot deep sinkhole had opened up in the fenced-in water retention area on the west side of the complex at 980 E. Church St. A driveway and parking lot separate the retention area from the apartment buildings.

So who do you call when a pretty big hole opens up on your property? Maddox first called the city of Bartow, which sent out some people to check it. But being on private property, it was up to the complex owners to take care of the problem.

Curious kids had already tried to climb the fence to get a closer look.

Talking it over, James Collier of Certified Foundations Inc., Tim Blocker and Madrid decided to try something they’d never done before: pumping in polyurethane foam as a temporary cap to keep kids, or anyone else, out of the hole. The foam is an environmentally-friendly, green product, they said.

First a high-strength geogrid was placed over the hole to give the foam something to stick to and to help to pull it out when it was time to fill the hole permanently, explained John Delashaw, Madrid’s chief geotechnical engineer.

Then the foam was pumped in Friday evening by Certified Foundations of Lakeland, which does sinkhole remediation. On Tuesday, April 5, the foam was pulled out and the hole was being filled in with dirt. Although it was raining again, Delashaw explained that the rain was actually helping wash the sand into the hole. Workers were going to have to spray water on it, anyway, so the rain offered natural aid.

The sinkhole occurred when the retention pond was filled by drainage from Church Street and the apartment complex parking lots from heavy rains Thursday, Delashaw explained. Pressure from the high water pushed down where a hole in the limestone has been for some time.

The hole is 35 to 40 feet away from a storm structure, Delashaw added, and that was constantly feeding water to the hole, taking sand with it. He termed this an erosion sinkhole, because of that the normal round hole associated with a sinkhole, also had a linear extension.

Some 160 yards of material went down into the hole, Delashaw estimated.

Near the surface, the opening was 15-17 feet in diameter down to 10 feet, then continued down 27-28 feet with a five-foot diameter. Running out from that along the drainage swale was an approximately 30 foot long channel.

After the hole is filled, soil borings will be done to test it.

This entry was posted in Pictures and tagged Florida, Polk County, sinkhole. Bookmark the permalink.