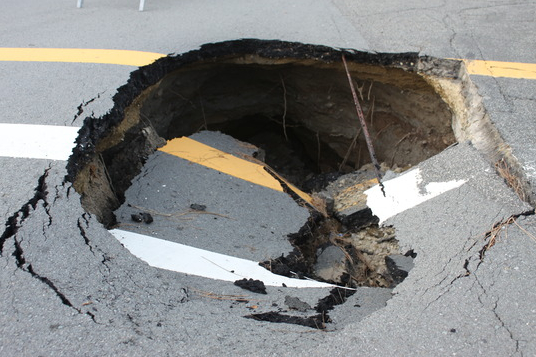 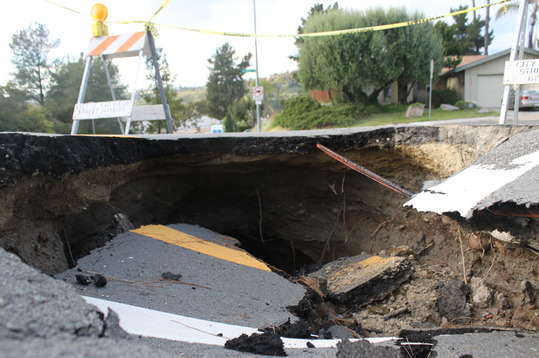 A failed storm water pipeline that caused two more large holes to open up in an Allied Gardens street last month won’t be repaired for at least another 15 months.

The holes forced the closure of one lane in the 7100 block of Princess View Drive near Fontaine Street. The holes have been increasing in size after the recent rains. One looks like an underground cave formation and even offers a view of the failed pipeline.

As the Mission Times Courier went to press, crews were expected to begin backfilling the holes. Officials say the wet weather has made it impractical to fill them sooner. Once the backfill is completed, the City will determine whether the roadway is safe to reopen.

Officials estimate about 300 feet of pipe needs to be replaced, but it’s a long-term solution that is well over a year away from being addressed.

“At this time there is literally no money whatsoever for that project,” Harris said. “We’re going to have to await fiscal year 2012 funding… and put together a project that will be contingent on the funds being released.”

The City hopes to get the work done as quickly as possible, but says even “the best case scenario” will have crews beginning to replace the pipe around the start of summer 2012.

Residents could see some drainage issues in the neighborhood next winter, but officials are optimistic the erosion will continue to be limited to the street.

A local realtor and his client will be especially thankful when the holes are filled. The economic downturn has made it hard enough to sell a home located between the closed sections of roadway.

In January, another large hole opened up right in front of the home’s driveway. Residents say they’ve never seen anything like this in the 30+ years they’ve lived in the neighborhood.

The city says the failed pipe was installed around 1964. It’s a corrugated metal pipe that is no longer installed today, but was used extensively prior to the 1980s. The pipes were used on streets with a downhill grade, such as Princess View Drive, because they were expected to hold up better.

Cobble and stone debris that find their way into storm drains stress the corrugated metal pipes and eventually lead to “a complete failure.”

Harris clarified that the large holes in the roadway caused by these failed pipes technically aren’t sinkholes (since they form naturally) but rather “catastrophic failures in the roadway above pipe failures.”

City crews are thankful for residents who called in to report the unusually large dips on Princess View before the asphalt gave way.

This entry was posted in Pictures and tagged California, San Diego, sinkhole. Bookmark the permalink.