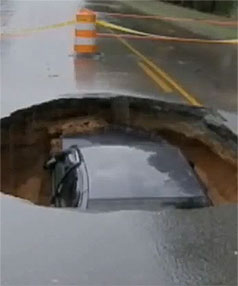 One driver in rural Georgia found himself in a hole heap of trouble while on his way to work.

Ira Strong was headed to work Saturday morning when his car was suddenly swallowed up by a giant sinkhole in the road.

“After I hit the hole, my airbags deployed and I came to my senses and looked around and realised I was still alive. I just climbed up out of the hole and called for help,” .

The sinkhole, caused by heavy rain in the area, had been marked by police beforehand but during the night someone had moved the traffic cones around the road hazard.