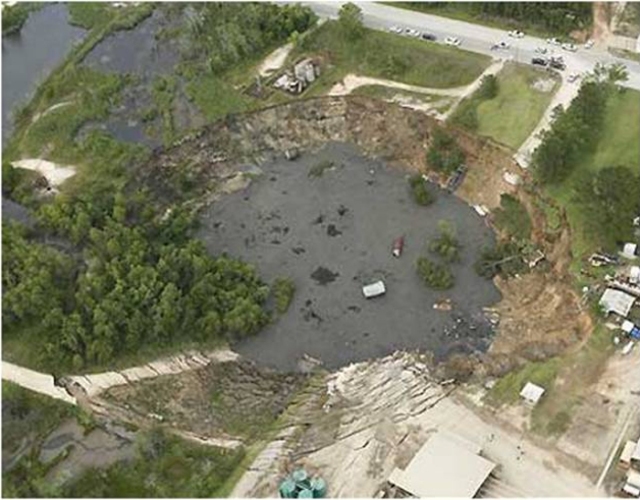 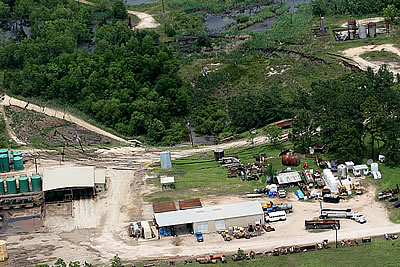 Equipment including large tanks, pipe ranks and other equipment that could not be moved fell into the hole as the ground gave way beneath them.

FM 770 remains closed and may be closed for few days until officials determine if the hole has stabilized.

Traffic on FM 770 is being detoured onto old FM 834 through Hull from Daisetta. The detour is a short one and will only cause a few minutes of delay for travelers on FM 770.

Corporal Hugh Bishop with the Liberty County Sheriff’s Office told i-dineout.com today that reports about the sinkhole first came in about 10:00 AM today and the hole has grown quickly is size since that time.

One homeowner just south of the sinkhole was told there was a sewer leak in his yard only to discover that a large amount of salt water was being forced up through the ground filling his yard and running down his driveway.

Both the Hull Daisetta and Hardin Volunteer Fire Departments have been on the scene all day long for traffic control and to assist the public in handling this situation just north of downtown Daisetta.

Late this afternoon portable lighting was being brought to the site in order to monitor the hole throughout the evening.

Officials from several government agencies have been on the scene most of the day today monitoring the situation as the hole continues to grow in size.

Luckily no homes are threatened at this time.

According to old time residents of Daisetta, a similar sinkhole happened in their town about 40 years ago sometime back in the 1960’s